Neither plagues nor treason nor weather can stop the progress of Technohol 13: the Atomic Drink! And lately, there's a whole lot of all three going on, but luckily I managed to get a whole lot of this month's work sorted out before, uh, everything happened around here. Yeah, I didn't completely sort out all the stuff I had on the docket for this ninth month of the Technoholic year, but that's fine.

To start with, I began work on the 1992 Cobra personnel roster, producing character descriptions of the Air Devils, the Flak-Vipers, the Headhunters, Headman, the Heli-Vipers, and the Toxo-Zombies. And then, since the 1992 equipment roster is done, I added the Ice Snake to the 1993 roster of people and things, and then updated the Pulverizer and Star Brigade Armor descriptions to add their Cobra counterparts.

On the GI Joe side of things, I've rehabilitated my descriptions of Barricade, Bulletproof, the Fortress America, General Flagg III, and the GI Joe Headquarters. While none of these descriptions were new, a bunch of them we're pretty involved. A few of them were relatively easy to Condense, Modernize, and Streamline, but a few more were really, really old - and it took considerable effort to fix 'em up.

Finally, where all my rules work is concerned, I think I've completed one-ninth of the massive third proofread of my four variations on the Powers document. From ground zero, I've worked my way through all four versions of every power from Ability Boost to Clairalience. I'd started on the other four clairsentient abilities, but during the Meth Hall Putsch on the sixth, and uh, I sort of lost my focus. A lot.

Furthermore, I want to get up to about a quarter of the Powers documents' third proofread sorted, though I'd settle for a third of it being done. That all depends on my work schedules, family issues what need sorting out, and of course a lack of any more calamities here in the States. So many chickens seem to be coming home to roost lately, though, that it's hard to say at this point.

But at any rate, thank you so much for dropping in. I know the progress I make on my various projects is slow, and probably frustrating to those who are waiting on me to finish x or y, but I'm plugging away as best as I can right now. And I'm glad you seem to tolerate that by coming back, so the hope is to eventually get everything in order here before I die of old age. Drop back to see how I progress!

In other news, I'm ostensibly still the steward of the 13's sister site, Gaming Nerds ᴙ Us. Of course, I utterly broke the entire site when trying to upgrade its forum, so I'm in the process of rebuilding that from scratch. However, it'll be starting out on a good foot, since I've already arranged the filtering that was so successful in keeping scumbag spammers away. Yay!

Despite the overt criminal nature of that corporation, Technohol 13 still has a Facebook page, which you can find here. I tend to make announcements there when I reach a major milestone on the site, in case you're one of those folks who doesn't like to watch my work in progress, and prefers to catch it all at once. Or if you just want to 'like' us. You're here, after all, so you must like us, at least a little bit!

But What Have I Done For You Lately, You Ask?

In the event that those expressive icons at the top (and bottom) of the page don't tell enough of the story for you to see what lies beyond them, here is a quick summary of just about everything on the site. I even added one or two pages that I didn't have room for in the navigation bar above (well it looks like I do, but there's more coming... oh yes.)

The New Universe: It was the world outside your window - at least, until the so-called White Event rippled across the face of the earth, leaving approximately two in every million people forever changed. With the dawn of the paranormal, the world would be forever changed - and for the worse - as various governments scrambled to master this new, uncontrollable power.

Gi Joe: a Real American Hero: Assembled from the very best members of the various armed forces, Special Counter-Terrorist Group Delta is also known by its nickname, Gi Joe. This group was created to handle all kinds of threats to democracy, but was forced to focus its efforts on Cobra, a ruthless terrorist organization determined to rule the world! Only Gi Joe stands between Cobra and its nefarious goal!

Timely Heroes: The dawn of the heroic age, the 1940s were an era fraught with peril, both in the form of rampant fascism as well as villainous individuals of great personal power. The only thing standing in the way of their conquering the world were a loose band of stubborn, individualistic super heroes determined to protect freedom at all costs!

Transformers: hailing from a strange world and unknown and variable distance from our own, the Transformers are a race of mechanoid aliens who ceaselessly vie for control of their native Cybertron... and the universe beyond! Their misadventures described in countless variations, across television and comics and even live action film, the Transformers' battle is never-ending!

Variant Earth 13: Superficially reflecting the 'real' world, Variant Earth 13 is a nexus of sorts, a place that has an analogue of events in a multitude of other timelines. While the Powers That Be try to keep a lid on things and preserve the status quo, all manner of ascendant beings are quite active in the pursuit of their goals, and events are quickly spiraling out of control.

MSH Infinity: Built for adventures throughout a multiverse of possibility, the Planescape campaign setting featured a battle of ideas amidst incredible locations. The MSH Infinity reference will be an eventual translation of this incredible material into MSH RPG terms, allowing you to take your heroes on an adventure they won't soon forget - if they don't simply move in!

Myths and Legends: Something of a new project I'm working on, Myths and Legends is an attempt to document, in RPG terms, a variety of obscure deities that most of you have never even heard of. Most of them will be from the land of Babylon, but others will be from additional places. Drop by and check out the divine when you've got the time!

Marvel Universe Miscellany: A place for those folks that don't quite fit into the sections above, the Marvel Universe Miscellany is a sort of repository for odds and ends that I've perpetrated over the years in statistical form, folks I don't want to build a whole reference for yet I wouldn't mind featuring on the site - since I did make them playable, after all.

Custom Rules: This is a compendium of the custom-built rules systems I have created for use by the general public. Currently, these rules are for the Universal Heroes Role Playing Game ('Classic' MSH RPG) as well as the 4C System: Edition 13 rules. I intend to eventually add Saga versions of all this material, as well as rules for one more game - but that's down the road some.

The Technohol 13 Master Roster: In the event that you are looking for a character you think I've covered in the past but don't want to leaf through the above sections to find him or her (or it), you can't do wrong to look here. This is a compendium of links to everyone I'm currently featuring on the site, in both their MSH Classic and Saga versions. It's huge but comprehensive!

Technoholic Updates: While I try to update the 'news' section above on a weekly schedule, more or less, I usually update the Updates page as soon as I've added something to the 13. Sometimes I'm working 'ahead' and sometimes I'm not, but that'll show you just what it is I'm up to at any given point in time, in the event that you're looking for the newest in Technoholic goods.

The Atomic Links: This is a collection of MSH RPG links I have assembled for you, either in a Classic or Saga flavor. The list seems to be dwindling rapidly of late, as AOL and now Geocities seems to be removing all their hosting services (or going under, as it may be). But these links nonetheless lead to additional MSH RPG material for your gaming use, so check them out when you're done here.

Technoholic Basics: This is a quick bit of information about the site itself, going a bit above and beyond what you see here on the 'main' page, and goes into my motivations for the site and so on. It's also where I've placed the Technoholic Color Changing Mechanism, in the event that you would rather pick your own color than go with the quasi-random Color Rotating Thingus I built a bit back.

Author Information: In the event that you'd like to know a little bit more about the author of this here web site (everything on technohol.com is written by me unless specifically noted otherwise), this is the link for you. Feel free to read about my sad little life and get to know me some, and if you have a burning need for even more Firebomb dirt, a link is provided therein.

Effie Rover's RPG Gateway has fallen, after an impressive eighteen year run. I was very happy to receive this award from them, since I think I had the only MSH RPG site that earned one, so I'm keeping it here for posterity. 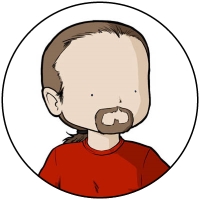 Got something to say to Firebomb? Sure, I used to have a Guest Book here that people would love to deface, but I had to take that down and haven't bothered putting up a new one yet. Or a forum or anything snazzy like that. So, since I don't have one of those any more, feel free to drop me an e mail message any time, utilizing this address here: firebomb@technohol.com.

If you're not seeing this content within the technohol.com domain, it's been stolen by someone who doesn't respect others' work.